March arrives and with it the coming of spring. The skies clear, the average daytime temperature rises by about four degrees centigrade to a balmy 24 down here on the south eastern coast and the olive groves become a riot of colour. it’s a great time for botanists and ornithologists.

The migratory birds such as the egrets and martins return from over wintering in warmer climes and some of the resident birds like the House Sparrow start to build their nests. Last year a pair made their nest in a hole in the wall outside our bedroom window (the builders having thoughtfully left a number of such holes suitable for nesting birds) which meant I was able to study them quite closely.

A Confusion of Sparrows

When I was a young ornithologist in England I was quite happy to differentiate between the two types of sparrow that I regularly saw: the House sparrow, Passer domesticus, with his grey cap and white cheeks and the Tree sparrow, Passer montanus, with his chestnut head and grey cheek patches. My first hint that sparrows were not as simple as I thought was the discovery that there was a third type of sparrow, the Hedge sparrow, Prunella modularis, which isn’t a sparrow at all but belongs to the Accentor family. When we came here to live on the southern coast of Crete my confusion increased as our local sparrows looked as though they couldn’t make up their minds whether they wanted to be tree or house sparrows. They had the chestnut head of the former and the white cheeks of the latter but they also had a black mask around their eyes making them look like diminutive highwaymen which didn’t occur in either species. I came to the conclusion that they must be House sparrows, not just because they were nesting in the house which is a bit of a giveaway but also the males and females were unalike whereas the cock and hen birds of the tree sparrow are similar.

Scurrying for the reference books I discovered that there were far more sparrows than I’d ever dreamt possible. Besides the House and Tree sparrows there were also Dead Sea, Fox, Lark, Rock, Savannah, Song, Spanish, White-crowned and White-throated sparrows as well. I began to look more closely at our little band of highwaymen. Out of this long list of sparrows the one that came closest was the Spanish sparrow, Passer hispaniolensis. The females of this species resembled the House sparrow but the males had chestnut heads and white cheeks and also the highwayman’s mask. Then the resemblance stopped for the Spanish sparrow had heavy black streaks on his back and flanks and ours didn’t. Also, the books informed me, they were only resident in Iberia and Sardinia and summer visitors to Northern Greece and Turkey. Oh well, back to the drawing board. 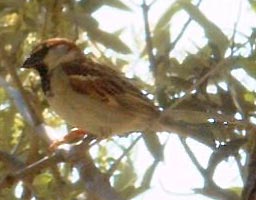 I then came across the “Italian” sparrow and things began to get even more complicated. The “Italian” sparrow was once considered to be a separate species but was subsequently downgraded (hence the Italian being in inverted commas). It is now considered to be a hybrid of the House and Spanish sparrows. So that’s what I’d been looking at – hybrids !

So, I wondered, do we have our own, unique, hybrid race of sparrows here in Crete? A quick search of the Internet revealed only one likely reference on a dossier from Birding Italy: on Spanish sparrows breeding in the Po Delta in 2004 which among other hybrids shows a picture of the Crete Sparrow. As yet however, Passer domesticus creticus is not listed on Avibase – The world bird database. A shame really, why shouldn’t we have our own sparrow? After all we’ve got the Cretan badger and the Cretan spiny mouse to name but two endemic species, why not the Cretan sparrow, even if he is only a hybrid?

Steve Daniels is a writer and amateur naturalist living near Ierapetra on the south east coast. His books: The Eggs of Saramova and Not Just For Women are published by Little Lemur Publishing (www.littlelemur.com) which he runs with his wife, Christina. 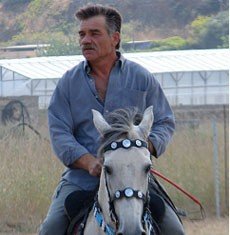