Anna waited two years to buy the spot of land upon which Limeri stands, on the edge of Ano Valsamonero in the Monopari region of Rethymnon. The aging papous (grandfather) who owned the land was not, at first, ready to sell. He did, though, sell to Anna and Andreas, after appreciating their stubbornness and persistence. They set about slowly building the house, which is the subject of this month’s feature on extraordinary, and extraordinarily beautiful, Cretan Houses.

Limeri means ‘a retreat’, or ‘lair’ (as in pirate’s or fox’s lair) in Greek. Anna, a Catalan, and her Greek husband, had the idea to create such a space for rest and retreat from the rigours of modern life. A great deal of work must be behind the evolution of the very impressive building. Much of this work, apparently started from very little, has been carried out by the two partners, each sustained by a vision now carried through to completion. Anna showed Yannis and I around the building and its grounds, explaining something of her philosophy and the ideas behind her project.

Anna’s speciality is aromatherapy, which she teaches. She has written a book during her many years in Crete, a guide to the herbs and the history of the area, the culmination of three years work. She believes strongly in the healing qualities of her surroundings, when they are respected and utilized properly.

Set in 17 hectares of land, 420m above sea level, and among amazing countryside, this was a house we wanted to see. It is built from local stone and wood, designed and, to a large extent, built by these people. Anna emphasized that they did not start with a large amount of ready money, but they were able to complete the house slowly, by making careful choices and decisions, alongside a willingness to learn and to do the work needed. Around the house, a small farm exists, providing plenty of work, along with food, meat included, for the occupants.

We began in the entrance hall, surrounded by pale stone walls, high wood-beamed ceilings and decoration in keeping with an overall aesthetic that carries throughout the house. 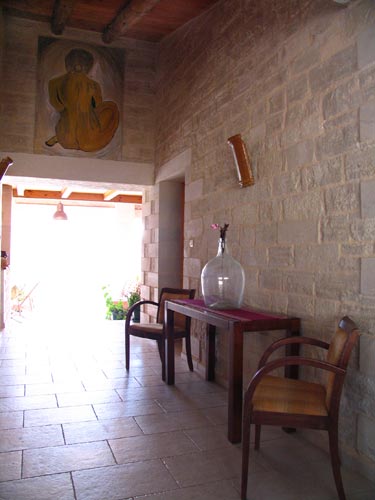 The style is not minimalist, there are rugs and ornaments as well as Anna’s own paintings, but we sensed a great amount of simple, open space around us. Part of the reason for this is the fact that eyes are immediately drawn to the light at the end of this hall; light which floods into a huge open-plan lounge/kitchen.

Walking through doors leading into this multi-purpose seating area, the visitor is immediately faced with high ‘French’ windows running more than half the length of what is a very impressive room indeed. Through the sliding windows lies a most wonderful view. One becomes lost staring out across the folds of hillsides and yellow flower and sun dappled slopes, winding paths and clusters of trees, shadows of clouds moving gently across them. So complete was the picture, standing out on the broad wooden balcony, that at first it seems hardly real. Gazing down to an idyllic valley floor, inviting and peaceful, I understood why Anna had said that it takes a while to feel the benefit of being here. First, you have to understand that it is, indeed, real. 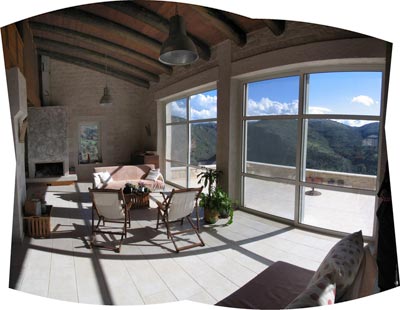 Anna likes to use the word ‘simplicity’, and indeed, the design is simple. At one end of the room stands a good modern kitchen. Separating the kitchen from the informal seating area is a dining table and chairs, their colour and shape uncomplicated and restrained. Central to the room is a low table around which we sat on comfortable sofas covered in simple (yes, that word again) fabrics. Beyond here, we were able to walk across a good amount of empty wooden flooring toward a handsome stone fireplace, around which seating can be drawn. It is a big space, almost giving the impression of a medieval dining hall, but with enough softness and light to allow relaxation and thought.

Above our heads at this point was the mezzanine floor, the wooden balcony of which extends a few metres out into the room and is accessed by a matching spiral staircase. Here we find bedrooms and bathrooms. The warm colour of wood here, and throughout the house, brings rest to the senses within such an expanse of neutral backgrounds. This lets the paintings, the plants, the fireplace and occasional splashes of ornamental colour to blend, rather than break up the grey stone and white of the main room.

There are three bedrooms for guests in the house, along with living space for the residents. Yet another guest room is being finished. Guests provide some income for Anna and her partners. Anna believes that the house and its environment have in themselves a therapeutic value, and it is indeed a calm place. I can well imagine feeling re-charged to face city life after a stay in the Limeri. In addition to its powerful location, Anna, and Andreas offer bicycle tours, discovery of plant and animal life, visits to the village and participation in the making of cheese, wine, bread, oil and raki. Guests can be making soap or working on a woodcarving in the company of experienced craftspeople. Another location next month, but for now, we have good memories of Anna and her lair near Ano Valsamonero.