Apokries in the Historical Museum

On March 4, the Historical Museum of Crete held the closing event of Nikos Psilakis’ photography exhibition, “Changing Faces, Rituals in the Cretan Countryside.”

The exhibition was held on the occasion of the publication of Psilakis’ booκ, “Folk Rituals in Crete. Traditions in the Cycle of Time” (Karmanor Editions), a fascinating study of Cretan folk rituals which are on the verge of disappearing or already extinct. They are recorded in a particularly systematic way, providing information unknown even to most younger Cretans.

During the exhibition, Nikos Psilakis spoke on the rituals and traditions connected to Carnival and Apokries, the three weeks preceding Lent. These three weeks of preparation for the great fast are also an important festival marking the end of winter, a time of fun, freedom and burlesque.

The masqueraders have fun, make fun and, freed by the temporary face they assume, break down social ranks and mores in a feast of misrule. At the same time, family bonds and those between friends, neighbours and villagers are strengthened through festive gatherings. At Apokries the whole village celebrates through traditional mumming events and the country outing on Clean Monday, the last day of Apokries.

Nikos Psilakis referred to all these customs in detail, to an audience that filled not only the lecture hall of the Historical Museum but also the stairs leading down to it. 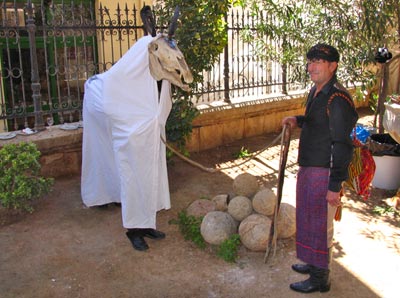 – Manolis Piperakis and the Gamila –

Afterwards, the Cultural Association of Ano Asites presented the mumming play of the “Gamila”, to the accompaniment of lute and lyre. A plentiful buffet with traditional dishes (tzoulamas, tyropites etc.) was set out in the Museum garden, and of course there was raki too.