The Baker of Georgioupolis

If you were wandering around the Plateia in Georgioupolis at 5.45 in the morning you may see the figure of Michalis Tichonov making his way to the Artopolion (bakery) to start the day’s bread making.

Michalis has been resident in Crete since 1995 and moved here with his family from Georgia in the former USSR.

This young man bears a striking resemblance to David Beckham. Whilst he reminds me I am not the only person to make this comment to him, he is very aware of the difference in his lifestyle which is one of regular hard work to feed people.

He remains a very affable man who has a pragmatic view of his responsibilities to the local community At 26 years old he has been baking bread for 10 years every day including Saturday , Sunday and Holidays,for his regular customers.

Depending on the season, Winter or Summer he makes between 600 to 1000 loaves per day with a consistent quality,definitely not your supermarket sliced loaf but proper bread in the old tradition.

He tells me his day starts with coffee which is very necessary before he lights up the stone floored oven with olive wood and olive pits.This is essential for generating the heat up to 400 degrees Celsius.

His dough is made from organic flour, fresh yeast and mixed in a giant processor. 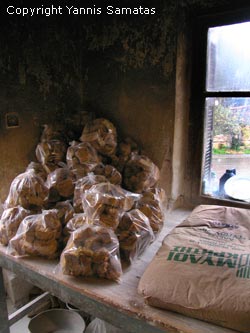 When the dough is ready he is assisted by two colleagues to cut, weigh and form the loaves and tray them up ready for the oven.

A batch is about 220 kilos in 1-2 kilo pieces which are fanned out across the stone oven floor with his trusty “Ftiari”, a 3 1/2 metre long spatula.This activity also regulates the even baking of the loaves to avoid overcooking any one loaf.

He also makes the traditional paximadi a double baked rusk from slices of the prebaked bread.

He tells me his ability to manage a multitude of different tasks at the same time is gained by his baking experience over many years. During our conversation, interrupted at regular intervals by hungry customers and the need to insert the ftiari into the oven to move the loaves into position for even baking.

I marvel at his stoical attitude towards the everyday pursuance of providing the staple food for the residents and visitors of Georgopolis. If this wasn’t enough he is also undertaking a 4 year Business Management course at the University of Aegean, which he attends in his holiday periods.

Asked what he will do after his education, he said “I may open my own Bakery but who knows”.

So if you are in Georgioupolis at 3.00 pm and you happen to think you have seen David Beckham on holiday from Real Madrid, spare a thought for Michalis Tichonov, who has just fed the hungry consumers of his famous psomi (bread) and leave him to have a rest some 1000 loaves later.

He is back tomorrow with a new batch with his ftiari (shovel) in hand, ready for a repeat performance.