The Cretan Gift Shop In Kalives 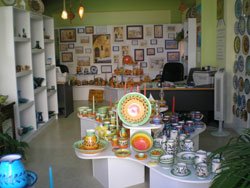 Next door to the Post Office on Kalives high street is the Cretan Gift Shop, whose attractive and highly colourful front window reveals a veritable cornucopia of Cretan ceramic earthenware, glassware, olive wood products and local fine art pieces. All these items are handmade in Crete by local artists and crafts people.

The owners of the Gift shop Lesley and Richard Tilly have been running the shop since April 2006.They arrived in Crete in 2005 and live at Halepa Plateau in Apokoronas, high above the village of Neo Chorio.

When you meet them, their charming exuberance belies their previous life experiences. Having to leave with their families, their native home in Zimbabwe, because of political changes and an increasingly disempowering regime, that made any continuity in their quality of life impossible for them and their families. Increasing fear, uncertainty and worries about their future lives, including their personal safety made it impossible for them to stay and exiled them from their homeland.

Richard and Lesley met in South Africa and married in 1988, where they managed a 5-star game lodge on a reserve for tourists and visitors on Safari. Leslie has also been a teacher but felt unable to continue teaching in her native Zimbabwe due to decreasing standards in the new government’s school curriculum and Richard had been a Brigadier in the former Rhodesian army.

In 1999 they then moved back to Zimbabwe due to Lesley’s mums increasingly failing health where they provided a security service for 53 farms. They remained there for another 3 years until the the Mugabe government started forcing the farming families off the land so they decided to re-settle in the UK.

They next moved to the Isle of Man in 2001 to manage a Hotel on the promenade in Douglas and lived at the Port of Eyre lighthouse on the northern coast, this they say, was not a very positive experience due to a poorly resourced and difficult situation with the functioning of the Hotel and of course the weather which they described as rainy and windy. Richard also became a certified health and safety inspector during this period.

Having been on Holiday to Crete they decided to move to here in 2005 because they were advised of the investment potential on the island and also Lesley had suffered with an arthritic condition prompting her Doctor to recommend a warmer climate for health benefits.

The idea to open the shop was primarily to provide them with work and an income as their pensions were in their former Zimbabwe, where now, due to the Mugabe regime, these had become impossible to get and their value was now lost due to an inflation rate of over 1000%.

I find, what I can only describe, as two incredibly resourceful people who have coped so magnificently with adversity. This year alone, Leslie needed hospitalisation for serious throat surgery and was back at work within days, she continues to recover well after adjustments in her medication.

They have made a new life for themselves in Apokoronas and are promoting local talented people through their choice to sell to the tourist and local resident markets in the locality of Kalives.

Both Richard and Leslie intend to share the running of the shop year round and are looking forward to selling their ceramics on the internet soon.

I would like to wish this fabulous couple all the luck in their new venture and really respect their investment in the local economy, for they are truly remarkable and resilient people, who are starting again in their senior years with such energy.

I am sure that they can’t fail with such a winning formula for success and the quality of the Cretan products that they sell.