After 25 years, Kissamos in western Crete has finally found a place to house its archaeological treasures. The Kissamos Archaeological Museum is housed in the town’s Venetian Residence.

The exhibits provide a view of local history through the ages, from prehistoric times to late antiquity and the Early Christian period.

The exhibition starts in Room 1 on the ground floor, with a general chronological table and map of local archaeological sites represented by the artefacts. This is followed by a presentation of the Minoan Period with finds from ancient Mithymna.

Room 2 opens with the Geometric Period, focussing on the historical development of the most important city-states in the area, Polyrrhenia and Falassarna. These two cities flourished in the Hellenistic Period, the former as a land and the latter as a sea power. Room 3 continues the presentation of Hellenistic times, with ceramic finds from dependent towns and settlements of the region.

The whole of the first floor is devoted to the town of Kissamos. The mosaic floors and marble statues of the Greco-Roman city are preserved in the museum.

Room 4, the largest in the museum, contains mosaic floors, wall paintings, a sundial, reliefs and statues from Greco-Roman Kissamos. Room 5 houses ancient coins and amphoras, while Room 6 contains clay, metal, bone and ceramic objects. The grave goods are displayed in the final room, where there are Christian tomb inscriptions, jewellery and other materials, a female figure of the 4th century BC and grave goods from the Roman Period. 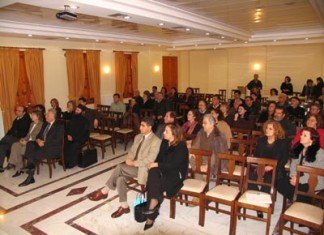 The Language of the Minoans