A 52-year-old woman gave birth to her daughters’ twins by in vitro fertilization (IVF) at a private clinic in Chania on Mayday. Her daughter, aged 30, was unable to have children. Obstetrician Haralambos Batakis explained the advances in medical science that made this happy event possible.

Doctors took eggs from the daughter, fertilised them with her husband’s sperm and transferred the embryos into the 52-year-old’s womb. The two baby boys, each weighing 2.5 kilos, and the 52-year-old were in good health.

The operation had been difficult due to the advanced age of the woman carrying the babies. “The lady had entered the menopause some time ago and we had to solve that problem. Also pregnancy at this age has to be monitored closely,” explained Mr Batakis. Women over 50 are not normally allowed to become surrogate mothers, and court rulings had to be obtained so that the process could go ahead.

The mother-grandmother, as she calls herself, says she will tell her grandchildren about their unusual birth when they are old enough. 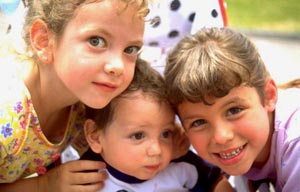