The island of Gavdos, off the southwest coast of Crete, shared the culture of Crete during the Minoan period while retaining some local peculiarities. This is the conclusion drawn from the archaeological survey carried out in the 1990s by the University of Crete and the 25th Ephorate of Prehistoric and Classical Antiquities in Chania. The results are confirmed by the field research excavation run on Gavdos from 2003 by the University’s Department of History and Archaeology.

Many important historical traces are preserved in Gavdos, the southernmost point of Greece and Europe, which some believe to be the island of Calypso where Odysseus lived for many years. The large number of ancient buildings discovered in recent years, together with the unique natural environment, make the islands of Gavdos and Gavdopoula a rare museum of nature and culture, one which needs comprehensive, serious and permanent state protection in order to survive and shine forth as it deserves.

The idea of an archaeological and wider multidisciplinary survey on Gavdos was first floated 20 years ago, in the late 1980s. Implementation began in 1992-93, continuing for a few weeks in August ever since. Scientists specialising in a variety of fields have collaborated on the project, which has trained generations of students who have done their summer archaeological excavation practice there. In the winter they study the season’s finds and prepare them for publication.

Gavdos, a great school for archaeologists

“Gavdos remains a great ‘school’ for us all – a difficult and demanding school, but also an extremely productive one”, says Katerina Kopaka, Associate Professor of Prehistoric Archaeology at the University of Crete.

“The excavation continued last summer, with undiminished interest shown by about 30 undergraduate and postgraduate students who worked with great zeal, often in very high temperatures, on windless or very windy days and in relatively harsh living conditions in a place with no electricity and little water to spare. The students are the scientific and labour force of this training excavation.” 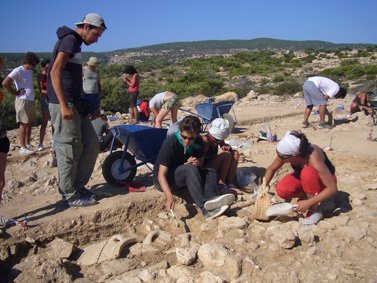 In the interior of Gavdos, in the environs of the restored farmhouse of the University of Crete at Siopata, part of a fairly large building complex is gradually being revealed, with several chronological phases and interesting finds.

“According to the data we have so far, it could be described as a ‘villa’ or a ‘rural villa’, by analogy to Minoan Crete. It has been preserved, almost miraculously, on the lower part of a heavily eroded hillside. Its position is carefully chosen, with cool breezes and a view of the sea. Its ground plan reveals a symmetry which is obviously the result of architectural planning.

“The complex appears to have been built before the middle of the 2nd millennium BC, in an area with signs of intense activity both earlier and later during the Bronze Age (3rd-2nd millennium BC). Clearing has begun in several of the rooms, which were used for many different activities, as storerooms, workshops, etc. Some of these bear intense but generalised traces of violent destruction by earthquake and fire, which are also reminiscent of palatial Crete. The rooms contain permanent and semi-permanent structures as well as moveable finds, which are often discovered on or near the spot they had been placed in.

“The pottery from the building is usually good-quality, decorated and fashioned of local clays. Pithoi and pithoid jars, situlae, cooking pots, jugs, a few cups and other vessels follow the typology and decorative styles of Minoan Crete. They do, however, have some local characteristics which show them to be closely related to Cretan pottery, particularly from the Mesara, and simultaneously recognisable as ‘Gavdos ware’, noted Professor Kopaka.

Finds include stone objects such as vessels and lids, quernstones and grinders for grinding cereals, and even a few pieces of jewellery, such as the small beads from a faience necklace. An interesting find this year was part of an almond-shaped agate sealstone bearing an artistic depiction of a ship with sails set. Similar finds imply that the users of the building were relatively well-off, and that Gavdos was generally prosperous during the period corresponding to that of Neopalatial Crete.

Gavdos, the first visit and the idea for the archaeological excavation

“We first visited Gavdos in 1987, unsuspectingly, on holiday”, says Professor Kopaka. “The boat from Paleochora suddenly transported us, like some kind of time machine, to a scarcely familiar place. An unusual natural environment, somewhere between that of Crete and Africa, a sort of deserted land, kept up by a few old people who were incredibly tough by late-20th-century standards, forgotten by the neighbouring Great Island and its inhabitants.

“However, in that ‘wasteland’, we found many scattered surface monuments, both permanent and moveable, witnesses to a rich ancient and more recent cultural heritage. At every step we saw many potsherds, foundations of prehistoric and historic buildings, dozens of impressive ruined farmhouses and countless terraces, the remains of extensive former cultivations.

“So, waiting for the strong north-westerlies keeping us trapped in Korfos to drop, rather alarmed but also enchanted, we first discussed the possibility of an archaeological excavation on Gavdos.

“The 1990s surface survey was also a training tool and was quite innovative by contemporary Greek standards. It was immediately broadened into a multidisciplinary project, involving collaborating biologists, geologists, anthropologists and other specialists, and set the difficult task of a global and balanced ‘mapping’ of the ancient and modern monuments of the nature and culture of Gavdos.

“We therefore covered the greater part of the island in systematic walks and recorded many dozens of archaeological sites which were still visible, sometimes in excellent condition, due to the lack of intense modern human activity.

“So it emerged that Gavdos has been ‘alive’ down the ages. It was been constantly inhabited since at least the end of the Neolithic Period, i.e. from the 4th millennium BC. It has ceaselessly recycled its limited resources ever since, sustaining many generations of locals and foreigners; in times of ease, even prosperity, as in the Minoan, Hellenistic Roman and First Byzantine Periods, and in times of privation and decline, as in the second half of the 20th century AD.”

The surface survey on Gavdos has also had some substantial practical results. The knowledge gained raised local awareness and led to the rapid establishment of archaeological zones by the Archaeological Service and the Ministry of Culture, when in 1996 intensive development projects were launched, disproportionately large for the scale and rhythms of the island up to then.

Over the last few years, the Ephorate of Chania has employed a local guard on Gavdos, Mr Vailakakis, who has taken exemplary care of the antiquities, left unprotected for so many years.

“I must also stress that our work has always enjoyed the support of Gavdos Community – the former dynamic president T. Tsiritsanis, now deceased, current president S. Lambrakis, priest E. Bikoyiannis – and the trust of its ordinary citizens. I believe we will never be able to thank them enough for their dignified hospitality over many years. We must also thank the University of Crete, which has steadily financed and supported our lengthy and not always simple research and training project on Gavdos”, concluded Professor Kopaka.

“An important fact,” said Professor Kopaka, “is the relatively recent recognition that the surface finds include a number of much earlier stone tools – dated to the Palaeolithic Period. According to researcher C. Matzanas, some of these have typological features dating them to over 100,000 years ago. No corresponding finds have yet been definitely identified in Crete, which is officially believed to have been settled for the first time in the Earlier Neolithic, in the 7th millennium BC.

The archaeological discovery on tiny Gavdos has fuelled special field surveys on the neighbouring Great Island, which I am certain will soon confirm the existence of Palaeolithic hunter-gatherers here too, a fact which will be an important scientific contribution on an international scale.”