In the orthodox religion, every profession has a saint and shepherding is no exception.  Saint George is the patron saint of shepherds and every year on his day,  April 23,  there is a spectacular ceremony in the Cretan  mountain village of Asi Gonia during which St. George is remembered, the shepherd is honored, and his  sheep are blessed.

I had the privilege of witnessing this ceremony two years ago.  On  Easter Monday, shortly after 8 am. the first flock of about 200 sheep came thundering into the village square in sleepy Asi Gonia.

Shepherds in traditional Cretan dress quickly herded them  in a huge circle around the statues of the town’s heroes. A few, bold renegades broke rank and ran down the hill, followed by most of the flock. The shepherds ran after them, shouting commands and using their  distinctive, twisted crooks to bring the sheep into line and back to the town square where they continued their circular meanderings. 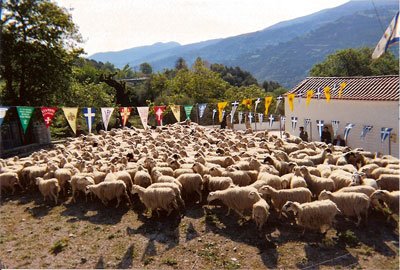 Soon the first flock was taken into a narrow chute where they were then milked, one by one, before being moved into a large enclosure next to the church.  Two shepherds milked the entire flock, taking less than 15 seconds to milk each animal.  When all the sheep were cared for and inside the large pen, the sounds of sacred music were heard as the priest came from the church to the enclosure where he then sprinkled holy water on the flock and blessed the sheep.

This ceremony was continued throughout the day into the early evening as hundreds of flocks thundered into the town square, awaiting their turn to be milked and blessed. They are not sheared until later in the summer before the hot weather.  The sheep’s milk was placed into large containers, heated, and offered to the thousands of people who came from near and far to witness this unique ceremony.

Following a tradition of many, many years, the eight hundred or so inhabitants of Asi Gonia offered food cooked in their home to visitors, but many  came with picnic lunches and enjoyed their mezdes washed down by the warm milk of the sheep. Vendors were in lots surrounding the church, selling products unique to Asi Gonia and the neighboring community of Argiroupolis, famous for its lovely waterfalls and springs and built on the ruins of the ancient Roman city of Lappa.

Asi Gonia was the home of Geroge Psychountakis, one of Crete’s most famous heroes who was known as “The Cretan Runner,” for his bravery in the resistance against the German invasion during world War II.  Mr. Psychountakis died recently and his obituary was published world-wide.  He was Asi Gonia’s most famous son and was a shepherd, like most of the male residents.  Some locals said they believed one reason so many people came yearly to the “Blessing of the Sheep” ceremony was to see Mr. Psychountakis and shake the hand of this brave man.

Trip to Frangokastello in Sfakia area in Southern Crete