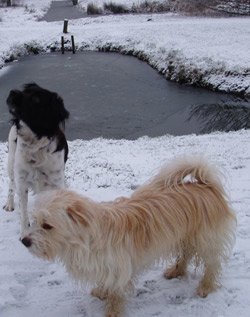 It so happened that Boomer’s girlfriend Auk was ‘in heat’ at the same time my Greek friend Anna sent me an e-mail about male dogs hanging around her house because of Argiro’s ‘heatness’.

The situation at my place was that Boomer was acting like a human boy in love: he did not eat for a few days, just laid on his blanket, dreaming about Auk, or was staring aimlessly from a window.

Anna wrote: “All male dogs in the neighbourhood want to make love to Argiro! I can hardly take her for a walk!”

This was three weeks ago. Why Auk has not been spayed yet? My Dutch girlfriend wants her to have a litter of this typical Dutch breed, next year. And I’m sure that all puppies will be sold before they are born! It is a very wanted breed.

As Anna had to visit her vet anyway for anti-flea and tick pipettes, she asked him when would be the best time to spay Argiro.

Anna wrote she got into an astonishing discussion with the vet about the overpopulation of dogs in some countries and that he made a calculation for her, just for fun… (I don’t mind sharing a part of her e-mail with you readers):

In Greece most street dogs – one way or another – gain their ‘freedom’ from their owners. Totally forced on their own, they breed and have puppies and multiply accordingly. Would you believe this:

There are a male and a female dog. The female dog gets in heat, the male and the female make love and about 9 weeks later 4 pups are born. After approximately 6-7 months later the female pups will have their first heat and can get pregnant, so after 18 months there are 6 adults + 12 pups = 18 dogs! This means that after 2 years there will be 18 adults + 36 pups = 54 dogs… Remember that not all dogs will have 4 puppies; some dogs can have a litter of up to 8 or 10 puppies.

No wonder there are so many dogs!

As you can understand, Anna made an appointment for spaying Argiro immediately: as soon as this first heat was over. The vet explained this would be the best time to do so, to decrease the chance of complications. An ovariohysterectomy or spay is the complete removal of the female reproductive tract.

The ovaries, oviducts, uterine horns, and the uterus are removed. Not only does this procedure prevent the animal from becoming pregnant, it also eliminates the twice-yearly heat cycles. The surgery removes the source of production of hormones. Spaying and neutering even prevents the dogs from some sorts of cancers.

Anna was so amazed by the calculation about the two dogs and their offspring, that she wrote a letter to the council of her village, to encourage them to start a spaying programme for the strays! As it not only helps to reduce animal overpopulation, it helps them live a longer, healthier and safer life.

If dogs could speak, they certainly would say ‘Thank you’ to her…

Read more from this series: