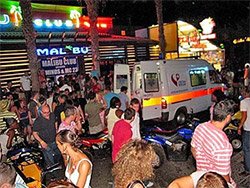 Using the same successful patrol plan as last year, the Police authorities in Malia and Hersonissos in Crete will try to reduce the problems that occur during the summer months due to tourists and agitators that flock in the region.

During a conference that took place recently at the Administration of the Prefecture, the police representatives, the district council and the representatives of the Municipality of Malia and Hersonissos decided that efforts should be intensified this year, aiming also at a better collaboration among them.

“We have to work using the last year’s implemented plan, which was in general successful. We will maintain the positive parts and we will try to ameliorate the plan as much as possible,” i Mr. Kouzelis, the Chief of the Heraklion Police Department, emphasized.

He also said that the existing forces will take over the patrolling of the most touristic areas. “The positive part is that mayors, owners of nightclubs, and businesses are aware of the problems and we will work all together, trying to eliminate them,” he added.

The Administrator of Heraklion Prefecture (Nomarch), Mrs Shinaraki, said that last year’s collaboration among forces and officials was quite effective and that they aim at even better results this year, because tourism is the heavy industry of the region and all officials need to support it, especially during times of crisis like now.

The Mayor of Malia, Mr Lagoudakis, said that all these meetings and conferences are indeed efficient and effective and aim at resolving the issue. He also indicated that everyone should work for the common cause in order to restore and preserve the reputation of these highly touristic areas, which are threatened by several agitators and troublemakers. These areas should be enjoyed by all tourists and locals.

Both Malia and Hersonissos have been having serious problems the last few summers. Authorities said several groups of tourists, mostly from Britain, were stripping in public, disturbing the peace, and falling into several drug and alcohol offenses.

The tourist resort in Malia has already witnessed several arrests in 2009, while last year hundreds of drunken tourists who ran amok where brought in by police, who hope to eliminate these incidents that offend locals and hurt the local economy and businesses.