Lahanodolmades, or staffed cabbage rolls with meat and rice, is one of the most popular and beloved Greek dishes you can taste in Crete or any other location in Greece.

Lahanolmades is a traditional Greek food whose roots are found in Asia Minor. The Greek people who lived at the seaside villages of Asia Minor brought the recipe for lahanodolmades with them, when they came as refugees from Turkey to Greece in 1922.

This dish has many variations around Eastern Europe and Asia, as many countries make stuffed cabbage rolls with rice, meat and veggies, but here we present the Greek recipe for lahanodolmades made with rice and meat and garnished with the tasty avgolemono – egg lemon sauce.

This recipe requires enough time and it can be quite tricky when preparing it – stuffing the cabbage leaves is an art, according to Greek chefs.

Lahanodolmades is definitely one of the tastier Greek dishes you can have. If you cater this dish at home, it is most certain that everyone will love you! 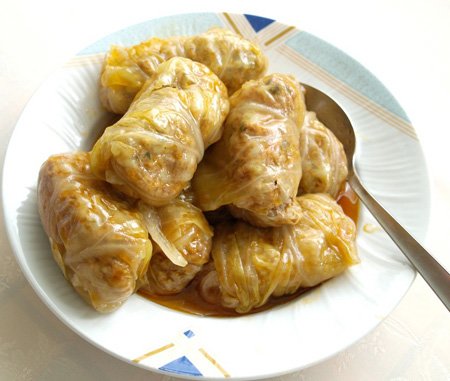 Wash the cabbage throughly and cut the root. Take a deep and large saucepan and fill it with water; boil it and then place the cabbage to heat it. Once heated but not boiled, remove the cabbage and try to separate each cabbage leaf as carefully as you can and then drain it. If you want to be able to staff the cabbage try to remove the hard part – stem from the leaves, without damaging them.

Take all the ingredients (except for the lemon and egg) and place them in a saucepan, where you have put a little olive oil and water. Let them boil for a while, stirring carefully and thoroughy, in order to mix the minced meat and rice with the herbs. Once the mixture is ready, you need to count the proper portion you will use in each leaf. Hold the leaf in your palm and place some of the mixture inside. Then try to fold it without breaking the leaf in order to create a small parcel. You do that with all leaves, or until the mixture is done.

At the bottom of the deep and large pot you used earlier, you can place some big leaves or the hard stems of the cabbage you removed earlier. Basically you need to cover the bottom to avoid destroying the cabbage rolls while cooking. Then you will start placing the stuffed rolls. Once you have put them all there, pour water and oil – almost covering the rolls and then cover them with a plate. Use a plate that won’t break while boiling. You will boil the food for approximately 50 minutes in medium heat.

Once the stuffed cabbage rolls are ready you need to prepare the avgolemono (egg lemon sauce). You will stir the lemon juice with the egg adding slowly some of the juice from the pot. Remove the pot from the stove and let is sit for a while. When the temperature of the food is relatively lower, pour the egg lemon sauce in the pot and try to stir it carefully so that you don’t break the rolls.

Your lahanodolmades are ready! The food is to be served warm, although it can also be eaten in room temperature. You can accompany it with a dry white wine, or even some raki if you are from Crete!