The largest Greek Salad in the world

The people of Ierapetra are about to make the largest Greek Salad in the world, weighing more than 11 tons.

The event will also be accompanied by an unusual war with tomatoes instead of bullets and guns.

The tomato war and the attempt to break the Guinness world record of the largest salad in the world will take place at the end of June in Ierapetra in southern Crete.

Ierapetra will probably be included in the famous Book of Guinness Records due to the restoration of an old local custom, the tomato war, which reminds us the similar custom in the Spanish city of Bunol.

This is a rather hard task but the area is known for the massive production of fresh and ripe vegetables. The area is also known for its greenhouses, so the locals are determined to succeed in order to make the area even more known. officials from the area have already contacted the pertinent committee of the records in Greece in order to learn all the details needed for their task.

The president of the Welfare Organization of Ierapetra Mr Spyros Tsikaloudakis is expected to take over the responsibility of this task and organize the event, because the locals should find adequate quantities of tomato but also enough volunteers who will cut the ingredients within a few hours.

The event of the creation of the largest tomato salad will take place on the 19th and 20th of June in Ierapetra, aiming at entering the Guinness Record book.

The people of Ierapetra are determined to help and so far many associations and local groups have already announced their participation in this feast. Mr Tsikaloudakis denotes certain difficulties though:

Moreover, we aim at having kiosks around the square with local products, in order to advertise and promote the products of the region. There is willingness from everyone to help and participate and this is very pleasant, so we hope that the tomato salad will manage to break the record”.

A Convention for Local Products in Ierapetra

While the locals will be trying to make a new Guinness Record, the Agricultural Association of Ierapetra will hold a convention for the agricultural products, inviting many officials from Crete and Athens, such as the Minister of Agriculture, Ms Katerina Mpatzeli and the sub-minister Michalis Karchimakis.

One of the main activities in the area is agriculture and the greenhouses of Ierapetra are known for their quality and quantity of production, covering an area of 13,000,000 square meters between the towns of Ierapetra and Myrtos. 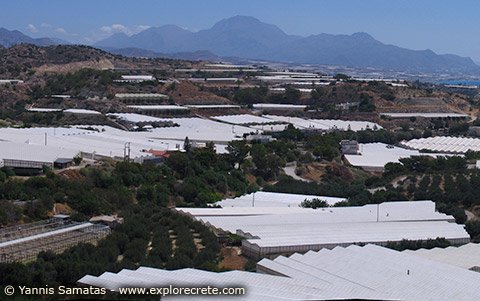 The agricultural production can be divided into two main parts, the olive oil and the fruit and vegetables. Huge quantities of tomatoes are produced in the greenhouses in Ierapetra and the local farmers are among the wealthiest in Crete.