A great part of the famous Palm forest of Preveli was burned on Sunday morning (August 22, 2010) during wildfires that broke out at the southern part of Rethymnon Prefecture.

According to reports from the Fire Brigade and Local Authorities, the historical palm forest of Preveli was burned to ashes, along with a thousand hectares of cultivations, animals and olive trees.

The fire broke out on Sunday morning at the village of Gianniou, near Plakias, and was set under control Sunday afternoon, after having burned thousands of hectares. The fire broke out in four different spots at the same time, a fact that raises suspicions for arson.

The fire brigade was not able to control the fire due to the extremely heavy winds and the fire threatened the Monastery of Preveli, that was saved due to a sudden change in the wind direction.

The winds also made it impossible for helicopters to drop water against the fire. The firemen created firelines and trails to prevent renewed outbreaks.

Crete boasts two palm forests, the one in Vai in Eastern Crete and the palm forest of Preveli, one of the most famous, beautiful and popular beaches in Crete.

Preveli beach is located on the central south coast of the island, 43 km from Rethymnon town, where the tall, steep Kourtaliotiko Gorge meets the Libyan Sea a forming a cool lagoon and the famous sandy beach of Preveli.

Tthe palm forest consists of the precious type of palm tree known as Phoenix Theophrasti, a rare species which is under extinction. This species is entirely different than the Phoenix Dactylifera that is found in Egypt and other areas of the Middle East and the US.

Insufficient protection of Preveli from fire

The local representative of the World Wide Fund for Nature (WWF) in Crete, Mr. Kaloust Paragamian asked for the head officers of the Fire Brigade to resign, suggesting that they were not able to protect Preveli as they should have.

More specifically, he asked why the pilot program of fire protection installed in Preveli did not operate, although it cost 1,4 million Euros.

He also claimed that planting pine trees close to the palm forest was a mistake, along with the existence of plastic pedalos and sun loungers, because they became combustible materials that helped the fire spread faster.

Restoration of the Preveli forest

Due to the huge ecological, aesthetical and touristic value of the Palm Forest in Preveli, the Ministry of Environmental Energy announced that it will cooperate with all pertinent authorities in Crete in order to restore this important ecosystem.

NOTE. All photos come from http://www.goodnet.gr/ 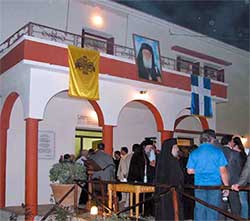