THE FIVE Ss OF CRETE

Crete , through its deep religious tradition, has to exhibit a wealth in churches and monasteries with rare frescoes and icons. It has a wonderful mythology with 12 glorious gods as the protagonists. It possesses miles of caves where colouful stalactites and stalagmites excite your imagination. There are many impressive gorges where the walker comes in contact with rare species of flora and fauna or is awed by the breathtaking beauty which surrounds him.

And, oh that Cretan hospitality – it never ends and comes straight from the heart.

Then, why is it that Cretan tourism numbers fall behind those of other islands such as Cyprus, Malta, Canary Islands, etc., especially as some of these islands are smaller, poorer in history, culture and natural beauty, while being almost identical in weather? (Excuse me if I sound a bit prejudiced, but I was born on Crete ). 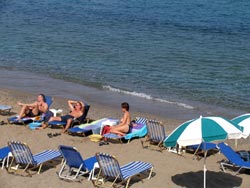 SUN: It’s a fact that the sun shines for at least 300 days a year, with warm temperatures tempered by fresh sea breezes, so that can’t be the culprit. The sun scores an automatic 10.

SEA: No matter what you call it – the Mediterranean, the Libyan, the Aegean, the Cretan or the Sea of Candia – this body of water is about the finest in the world, with its aquamarine, and sometimes deep blue splendor, it gently kisses your feet for miles on end. The sea gets a 10, too, of course.

SAND: Well, here’s where we start having problems. I remember back in the early 70s when I first returned to my homeland for a vacation after an absence of almost 15 years (September, 1974, to be exact), the sandy beaches – white and volcanic black alike – were like glistening jewels studding the shores of Crete.

Unfortunately, this is no longer the case. Most beaches are littered with winter debris in the early part of the season, and serious clean-up doesn’t begin until after the tourists start to arrive. And, maintenance throughout the rest of the season varies from poor to non-existent on much of the seashore. Then you have the other problem. You know that delicious feeling of the sand trickling between your toes as you walk the lonely length of beach? Well, most of these beautiful and easily accessible beaches are now inundated with wall to wall sun chairs and umbrellas which seem to multiply ten fold almost daily. The sand scores 5.

SEX: Now, back in the early days when I was still married to my first husband and reasonably happy, I was not above enjoying some harmless flirtation with the local palikaria (young Cretan men). Kamaki then was still an art and performed with respect. The local men would give you a wink and a smile while they sized you up with appreciative looks. Then they would ask you out for a drink or dinner, and there was actual conversation. They showed interest in hearing about the country you came from, the different customs, and then they would proudly explain their own customs and show off their island. Yes, of course they were trying to score, but it was done with such style!

Today, they seem to think that all foreign women have just two things in common – being clueless and being easy. So you walk down the street feeling sexy and uninhibited (common feelings when holidaying on a hot island) when suddenly a car screeches to a halt next to you with lewd sucking noises emitting from its open windows. When you fail to be enraptured by the car’s occupants they act as if you’ve just insulted their heritage. Things are not much better when walking the beaches, either. So, let’s see. We have to score sex on three levels: quantity, 8; quality, 4, style, 0.

STOMACH: Since sex is out (well, almost) you decide to indulge your other senses in some of that famous Cretan cuisine you’ve heard so much about. Hold on, there’s a problem. Many of the tavernas in the most easily accessible tourist areas do not cook with real olive oil so visitors think local food is heavy, greasy and rather tasteless. Besides, their idea of traditional recipes would make Grandma Sophia from Armenous turn over in her grave. Of course, there are many excellent Cretan tavernas, but you have to look for them – or ask any expat. We all have our favourite place. The score for the stomach ranges from 2 to 9, depending on where you go.

So, to all the readers of The Crete Gazette – tourists and expats alike. Enjoy this vibrant island which is bursting with so much natural beauty and wonderful people. And see how you score the five Ss.

Touts in bars and restaurants in Crete