AROUND CRETE IN 50 DAYS – NOTES FROM MY WALK 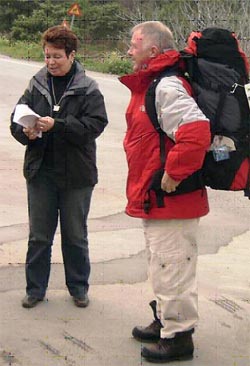 When I had the idea three years ago to walk around the entire island of Crete , I wasn’t even sure if I could achieve my goal. In fact, I had no specific goal. Just walking around the island was enough. As I kept thinking about it, the idea of combining the walk with a charity started taking shape.

Since I’ve always been concerned about animals, I decided perhaps the walk could help raise money for their welfare. My friends Alan and Marilyn put me in Gayner Vlastou, founder and owner of the Cretan Animal Welfare Group (CAWG) in Malia, an organization which cares for sick, wounded and neglected animals. When I met Gayner at her house, called “The Haven”, and saw how dedicated she was to the animals, working with only volunteers, her devotion and struggle broke my heart so I decided this is the charity to help.

Finally, last March, on my 50th birthday, after an intense logistic preparation, followed by heavy physical training for four months, and a rather difficult organization (I had to pass 750 villages), I was ready to “take off.” The plan was to leave from The Haven in Malia on March 1 st and arrive back on April 19 th . Everything was ready -my website crete-in-50-days.com was doing well, the weather was perfect and, with many friends on hand for support, I left, walking in the direction of Agios Nikolaos.

When I passed the Monastery of Selinari, Agios Georgos, I was blessed by a priest to have a safe walk, and many times along the way I thought of this young monk and his kindness. For the walk, I was able to organize overnight places for only 35 days . . . the rest of the nights I had to find by myself, on the road. I would sleep in apartments, hotels, at private houses, on the beach and in the mountains, in my tent and even in a donkey stable. It was not always easy to find overnight places, as the so called “Cretan Hospitality” is a bit gone, according to my experience. Almost everywhere I went, in places where I had nothing arranged before I left Malia, I had to pay as a tourist! Very few exceptions. For them I keep good memories. Walking for Animals is not very well understood by the local people, as they hardly walk themselves. However, Compared to five years ago I think things are improving very well.

As it turned out, just about every night was passed in a quiet and restful manner, and this was a MUST because the next day I had to wake up around six o’clock in the morning for another 20 to 25 km! Planning, discipline and good balance between food, drinks and rest was an absolute necessity. Sometimes I left my overnight place without breakfast, which I had to find along the road. No problem, I always found something. Most of the days I was on the road for about eight to nine hours during which I was actually walking about five hours. My backpack had an average weight of about 22 kg. During the daytime I did not eat much but consumed about four to five liters of water, which was easy to find with all the springs, wells and streaming rivers with their crystal clear water along the way. Amazing thing was that I only got one hour of rain during the entire 50 days, and that was in Gournia, near the Minoan settlement. I could not take shelter there – all Minoans were gone! However, I found a large carob tree which served me well. Only one hour of rain in more than 200 hours of walk – lucky me!

During my walk I talked to thousands of locals, including mayors of villages, and some expats, some of whom offered me an overnight stay when I needed one. Sometimes positive chats with locals, but most of the time they had an attitude of non understanding – Me ta podia, 50 meres yiro yiro stin Kriti ? Trelos eise? Nai, trelos ime – was the everyday conversation.

In villages like Malia (at the end of my walk) and the City of Heraklion , I was welcomed by the mayor or his representative. The mayor from Malia promised me to help where he could, in order to support The Haven. In Iraklion , where news media (and the police!) where waiting for me, I received lots of support from Heraklion Municipality and the newly formed committee for Animal Welfare of Heraklion. These people are building a very professional Animal shelter in Filaki, a short distance from the capital. Four people will be working permanently to take care of the many stray animals in the area. All expenses will be covered by paid by the Municipality of Heraklion. Fantastic!

The police were not there to cheer me on. There was a complaint from a former animal worker at the old animal welfare shelter in Iraklion) stating that I had sold medicines, and even neutered and spayed animals during my trip and put the money I received for that in my pocket. Ridiculous! Since I was surrounded by some city officials, the police officers quickly understood the error of the charge, and even ended up wishing me good luck with the rest of my trip.

Once the issue with the police was cleared, I had a direct interview with ET1 TV, with friends and supporters, including expats Simon, Guido, Gayner, looking on from a distance. After that, I continued my walk in the direction of Gournes, with Simon joining me on the walk that day. Alan and Andy joined me as well, especially on the very heavy and dangerous walk from Roumeli to Sougia. Thanks, guys, we had a wonderful time! The South of Crete is still a paradise. I can not forget to mention my friends Bob and Lynn Tate, who helped me so much in Paleochora (they walked with me from Sougia to Paleochora) and Bill, from Stavromenos, who walked with me from Rethymnon to Perama.and another Bill (Bradley) from the USA , walking with me from Pitsidia to Timbaki. Wonderful times, all!

Slowly, but with certainty, the problem of the strays in Crete is being solved, and the local people are becoming more and more informed as to the care of their pets and other domestic animals. For me, personally, this walk brought a huge amount of background, information, pictures, etc., which I will need to write my book on my experiences on Crete .

I can not forget to thank all my sponsors, friends, volunteers, and everybody, involved and helping during these (and before) 50 days. As well as the thousands of people I met on the road and with whom I had a short, and sometimes much longer, chat. But I can also not forget the many strays, “barrel” dogs, cats, etc. which I met during my walk around the island. For them, I hope, my walk around Crete in 50 days brought a solution – to be able, finally, to enjoy life as well.

But the biggest thanks of all has to go to my partner Christina, who supported and assisted me in all preparations, as well as during the walk itself.  She supplied me with clean clothes, energy bars, instant soups, and many other sorely needed items. With the support car, which was sponsored by Aris from Mission Car Rental, she drove about 3000 km all over the island, celebrating my 50th birthday on her way . . . Filakia, Christina, you did a fantastic job.”

Editor’s Note: To date, 2465 Euros has been donated to The Haven as a direct result of Ivan’s walk. Also, the publicity surrounding the event has stirred up much interest for the cause, and The Haven reports that there are now more volunteers than ever before. Good job, Ivan – congratulations.