It was one of the hotter summer nights of July when I left Heraklion “boiling” at 31C and took the road for the inner island towards the municipality of Profitis Ilias.

Five or six kilometres out of the city the temperature already dropped to 27 degrees and I drove the rest of the way with relief to the concert of Vassilis Stavrakakis at the Theatre of Agron (Fields), located at the small village of Kiparissi, about 25 kilometres south of Heraklion. This part of the island is rural farmlands, with hills filled with olive trees and vineyards. The road in this area is winding and quite narrow, but each turn brings me a little further from the hustle, bustle and heat of the city. Once again, I’m impressed with the fact that a “Crete” so different can exist so close to Heraklion. It’s obvious that life here rolls on in a different rhythm – so much simpler, nearer to nature and people – in essence, more real.

The municipality is quite large, with a population of about 3,000 people whose main businesses are agriculture, stock farming and some industry. Near the county seat there is the historical site which gave its name to the entire district. Southeast of Profitis Ilias town, you can see the peaks of Rokka, where Nikiforos Fokas, in 961 AD, built the Temenos Fort to protect the Heraklion area from the Corsairs, and other later invaders. By the way, recent archaeological searches show that it was in this area that the Acropolis of prehistoric Lykastos was built – one of the 100 Cretan cities mentioned in Homer. 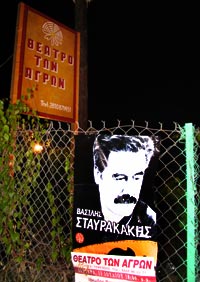 The Theatre of Agron is situated a short distance before Kiparissi – there are signs and it’s easy for someone to find. I park my car on the road, and walk down through the vineyards. It is so unnaturally quiet for a concert area that my first thought is that I came through the wrong entrance. Then I spot the evidence that a Cretan Music Concert will start soon – it’s a poster announcing the evening’s fare, with a small table at which young girls are dispensing tickets at € 10 a head. The theatre itself is a stone-built amphitheatre with bench-type seats and a circular stage. It blends nicely with the surrounding nature, and the fact that it was created by a private citizen, Yiannis Somarakis, without the support of any government agency, impresses even more.

Every summer numerous events, which are followed with interest by many residents of Heraklion, are held in the theatre. The atmosphere is loose and comfortable, and some very good souvlakis, along with cold beer and soft drinks, are available from the theatre’s cantina.

After the usual 45-minute delay, the concert started with Vassilis Stavrakakis, an artist known throughout Crete for the quality of his musical creations and interpretations. This evening he was accompanied by:

They played beautiful traditional Cretan music, with a combination of old and new songs. There was a variety of tunes – some wonderful melancholy numbers, slow and nostalgic, but also a collection of uplifting and vigorous tunes. We especially enjoyed the Mantinathes (Cretan limericks) about the sorrow of love, but also about how love brings joy and meaning to life at any age.

Maria Fasoulaki’s vocal interpretations were wonderfully filled with a melodious maturity. Mihalis and Giorgos Stavrakakis, considered tops in their field, also sang several numbers. Of course, Vassilis Stavrakakis was the star of the evening, and he easily filled that role with his robust, mature voice, and the endless liveliness of his performance. His work is characterized by its quality and respect to tradition – in other words, his refusal to introduce elements which would debase the attributes of Cretan music.

Regardless of what anybody writes about the concert, what counts most is its acceptance and appreciation by the audience, and that night the performers collected those two commodities by the bushels. The people applauded enthusiastically, not once but several times, and it was easy to tell that a beautiful night at the Theatre of Agron was enjoyed by all.

Congratulations to Vassilis Stavrakakis and his company for providing such musical joy. And, of course, many thanks to Yiannis Somarakis, for building such a delightful venue – and for proving once again that an inspired, restless and creative man can often succeed in what those big-planning “experts” only promise. 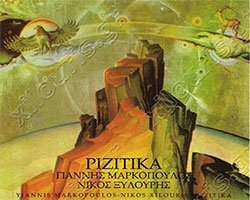