Ingrid Magnus, her Cretan Odyssey is a work of art

“But where would you hang it?”

That was one of the first questions we asked Norwegian artist Ingrid Magnus when we walked into her Stalis studio and found her smudged with colour and wrapped up in a piece of canvas about the size of a bowling alley. Granted, not a very “artistic” question, but her reply was quite artsy indeed: “Who knows? It’s just something I had to do.”

The subject of conversation was Ingrid’s mammoth work-in-progress, a 10 square meter acrylic painting called, “Before the Written Record,” depicting her reckoning of early mankind. When we visited Ingrid at her little art studio, tucked above her living quarters in Stalis, she was working on one of the last remaining sections of the painting. The rest of the canvass was rolled up. 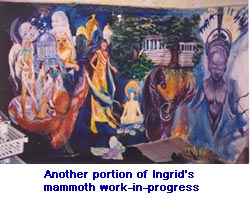 To show it, Ingrid unfurled the work – which was no easy task. She propped up one section with a chair, grabbed a hammer and nails to tack up other segments, then had her visitor, with outstretched arms, hold up still another component – a sort of human easel. However, the fruits of our labour were well worth it. Wrapped around the room like loose-hanging wallpaper, the painting, though still unfinished, was a dynamic representation of early history – one worthy of a showing in a much more suitable accommodation. Although yet to exhibit her many works in Crete , she is currently looking for a gallery in Heraklion or Hania for her first public showing here sometime next year.

Ingrid, a native of Oslo , arrived in Crete seven years ago, by way of France , England and the United States . Other than her time in Crete, she feels her most productive period was when she worked in Paris about 12 years ago. “There’s a reason why that city has a long-standing reputation for artists and writers,” she said. “There’s something about working there that brings out the best in an artist.” However, Ingrid is even more satisfied with her work in Crete . “There is no question in my mind that I’ve done my best work thus far right here. Being surrounded by the beauty and culture of the island is great motivation for creativeness.”

Being an artist was Ingrid’s only goal since childhood. After showing an early interest in art in her pre-teen years, she began serious painting in the mid-sixties at the age of 14 by attending private classes. By the time she was 18, she had shown enough promise to be accepted into Oslo ‘s highly regarded School of Art and Design. After leaving art school, one of her instructors was so enthused by her work that he offered to continue her education through free private classes. “He also provided the materials at no cost,” Ingrid remembers. “I was so excited. He was a great man and remained as my instructor and mentor until 1985.”

Around that time, Ingrid won the first of several “best painting” awards in local competitions, and her first public exhibition soon followed in an Oslo suburb, which was highly successful. Through these presentations, her reputation began to grow and commissions for private paintings and portraits soon followed.

While Ingrid works in all mediums, she prefers to paint in oils. “There’s just something about working with oil on canvass that seems to bring out the best in me,” she said. However, critics who view her works in water colour, acrylic and charcoal would be hard-pressed to agree – all of her works are of the highest artistic merit.

Asked who her favourite painter is, she answered without a moment’s hesitation. “Edward Munch,” Ingrid said with a smile brought on by the mere mention of the late artist’s name. “He was such a happy painter,” she said of the man she considers as Norway ‘s greatest artist. “He’s my all-time mentor . . . responsible for much of my inspiration. If I can even approach the level of his work I’d be happy.”

In addition to painting, Ingrid is an accomplished writer, with many short stories published in various magazines. She has written on many subjects, but considers her articles on “mysticism” to be her favourite. She is planning to publish a book featuring photographs of her paintings and selections of her writings.

However, Ingrid’s immediate project – Before the Written Records – is still in the works and many who have already previewed it are anxiously awaiting its completion and awaiting its public showing in a proper gallery. For one, this reporter is looking forward to viewing it without a fistful of canvass in each hand.

Editor’s Note: Ingrid Magnus can be contacted at: