You know what I hate:
Crete Gazette reader survey exposes our pet peeves

Is Crete truly an island of grumblers?

To find an answer to that question, you just have to go to any local pub and listen to the expats (New Cretans) moan while sopping up another pint . . . or stop by any village kafeneion and hear local men (Old Cretans) complain while rapping their knuckles on the table.

Or, better yet, just ask The Crete Gazette readers who comprise a true cross section of Crete – including expats, locals and tourists – representing a multitude of national backgrounds.  That’s just what we did – then compared the results with Britons and our other European neighbours, which were surveyed in a separate poll by Reader’s Digest.  While some pet peeves are unique to Crete, like those ugly, unfinished buildings, others, such as litterbugs, annoy just about everyone.

For example, people who drop litter tick off 85 percent of Gazette readers, which is almost the same as the rest of Europe:  89 percent of Brits and 86 percent of all other Europeans.  With so many people outraged at this horrendous practice, it makes us wonder just who is responsible for throwing garbage in the street.  Could it be that aliens from space drop down at night and cover our earth with crumbled cigarette packs, plastic bottles and paper coffee cups?  We don’t think so – since we all witness this “criminal act” every day and the culprits look just like us!

“If we see people drop litter, we should pick it up and give it back to them,” Lefteri Takakis of Gournes says emphatically.  And he’s a man that practices what he preaches, recalling the time he spotted someone throwing a frappe cup out of a car window.  “I was riding behind him on my motorcycle and I became outraged,” Lefteri says.  “I scooped it up and chased him.  A couple of kilometres down the road I pulled up along side and tossed the litter in his car window, saying: ‘you dropped this a while back’!”

John McLaren of Hersonissos relates another litter story.  “A few days ago, I was on my balcony when a car pulled up, a young man got out, carefully removed two plastic bags full of rubbish from his car and threw them in amongst the olive trees across the road from me. I was so outraged that I forgot my language (literally) and shouted at him in English to “Pick those up!” His response was to put a finger to his lips, motioning me to be quiet, while he jumped back into his car and drove off – leaving me to clean up after him.”

Geoff, of BritsInCrete in Agios Nikolaos, puts “Litter Everywhere” on the top of his list, with “Stray Dogs Everywhere” as his second pet (literally) peeve.  Paola Ioanides of Kokkini Hani, also has “litterbugs” as numero uno, but her second peeve was the only one in that category.  “Another really disgusting one is when [some] Cretan men talk to you and at the same time scratch their balls,” she writes. “That is really sick!”

While no one else listed Paola’s second complaint (although almost every woman we asked agreed that it’s a common practice, and indeed sick!) Geoff’s stray dog peeve, and the mess they make in the street, annoyed only 49 percent of our readers who live in Crete.  In contrast, in other countries it ranks neck and neck with littering: 90 percent of Brits and 82 percent of other Europeans are fed up with stepping in that mushy, smelly stuff. 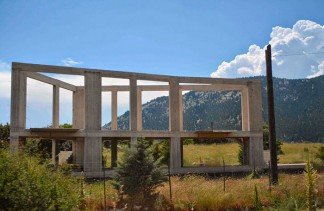 The one thing that is unique to Crete, and annoys almost all Gazette readers – 91 percent – is “unfinished buildings” the fact that so many are allowed to remain in that state for years, some since well before 1985.

“I’m really fed up!” states one English expat, who, six years ago, built his dream villa on a hilltop in Milatos overlooking the Med.  “No sooner did I move in, some a–hole started building next to me.  He built the concrete frame, then stopped.  Now for the past five years my view on one side includes a crumbling concrete monstrosity with rusted rods sticking out of the top.”

“I just don’t understand it,” says a Dutch tourist.  “In all other ways Crete is such a beautiful island – then you have these disgusting buildings all over the place.  I’ve been to just about every other island in Greece, plus the mainland, and you never see anything like this.  How can something like this exist here?”

“I’ve been coming to Crete for 14 years,” relates a visitor from Scotland, “and each time we return we see the same unfinished buildings – plus many more.  It’s become a game between my wife and me.  Before we leave home to come over here we say, ‘can you guess how many new unfinished buildings we’ll see this time’?”

Bad driving is another major pet peeve of Gazette readers, ranking way ahead of the other survey.  In Crete, 87 percent of the people are annoyed by drivers who speed, tailgate, or pass on curves or over double white lines – plus assorted other rude driving habits.  Only 75 percent of Brits and 73 percent of other Europeans find bad driving annoying – the results of which seem to draw the conclusion that Europeans have become more complacent with the problem, or Crete happens to have a much greater number of morons behind the wheel.

Queue-jumping ranks high in both surveys, with 81 percent of Gazette readers finding the practice maddening, while 84 percent of the Brits and 81 percent of other Europeans think it’s annoying.

Certain pet peeves are more prevalent in Crete.  For example, unpunctuality only bothered 60 percent of the Britons and 68 percent of other Europeans, while, in Crete, it ticks off 80 percent of the people.

Here are some of the other pet peeves unique to Gazette readers:

While Gazette readers may have many things to grumble about, the survey brought out a very important fact.  One hundred percent agree that living in Crete overshadows everything else – pet peeves or not!  As Joseph Reddin, a reader from Ireland, puts it:

“The only thing that really annoys me about Crete is having to go back home to Ireland!”