The House of Virginia and Wolfgang in Kounali

Virginia and Wolfgang live in a house that seems to be an embodiment of the dream shared by many foreign settlers on the island of Crete. It is approached by a country road that leads through wild countryside and neat olive groves, turning and climbing as it snakes its way from the north-east coast, near Malia, upward toward the village of Kounali, five kilometres from Milatos. The Gazette begins an occasional feature looking at remarkable homes, and the dreams of those who live in them them.

The house belongs inside this landscape, it does not impede nor impose upon the land. We are greeted by Wolfgang, who has a handshake like the brakes on an Audi. Later revealing his background in engineering these very German machines, he gives the impression of someone not entirely of the machine age, but very gently attempting to create a sense of order in a wild and chaotic environment. If he is retired, how strong are the ones currently working? We are soon introduced to Virginia, and begin to gain the sense of a home among stone- bordered fields.

I had already begun to wonder at the history surrounding us. We have passed the remains of a sizeable settlement, now lying in clusters of squat, vaguely house-shaped piles of stone, ages old and dark against the trees and long grasses which dominate these hills. Yannis and I have touched upon the past of Crete many times, and are now heading toward one kind of future, that is, the homes built recently that do not recreate the past, nor do they betray it. Our introduction to this particular incarnation of Cretan living is via the garden, and our first meeting is in the little greenhouse.It is a familiar scene in many villages to be greeted with handshakes,kisses and the sight of a handful of freshly picked lettuce, or whatever crop is in season.

The house was built according to the plans of a compatriot of Virginia and Wolfgang, a former aerospace engineer from Germany. He and his wife had the idea to lead a simpler life, without outside electricity, and so none has thus far been installed. This has the advantage of deterring would-be builders from choosing adjacent land, and fields around the garden of the house remain, for now at least, empty of further construction.The aim is to maintain a house that is as self-sufficient as possible.Wolfgang and Virginia, however, have not turned away from the modern world. For them, it is not a matter of rejecting progress, but carefully counting the ways in which progress may be used by us.The priority must be to minimise harm, to maintain the natural order first, and to re-use what is consumed. 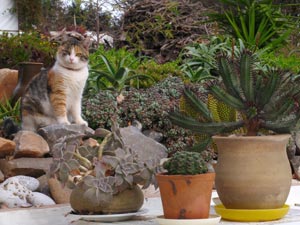 The garden now is a pleasing collection of weeds and herbs,flowers, many cacti (the designer was a cactus fan), and of course trees, both fruit bearing and decorative. It would be wrong to say that it is without shape, it has several shapes. Each side of the house looks out upon a significantly different set of attractions,some natural and some built. The stone walls that signify various ‘corners’ of this environment lead the eye to new spaces, new areas of planned space, beyond which lie the jagged, beautiful but in hospitable mountains, the fields and goat-pastures of Lassithi. In every direction within this garden, it seems, one is led to a corner where something has been created. Limestone rocks frame winding pathways throughout, offering a variety of areas in which to stop and look around. Facing the whole property is the sea, always changing. Wolfgang sees the garden as a work in progress.

It is not a huge garden, but one in which every fold and bend offers possibilities. It remains both full and open, providing shelter and allowing the eyes to travel far. Wolfgang spoke of blending plants he has introduced from abroad, visitors as he says, with indigenous varieties. Personally, I began to imagine a playground for a child delighting in entering some magical garden of spirits and elves, a sort of mystery maze. Whatever, it does take work,and both partners are working each day to realize their own vision of how this space will provide beauty, and fresh vegetables, or a happy combination of both. Features include a fine old limestone kiln, the old-fashioned method for producing whitewash from limestones, a reminder of former generations who have lived here. They may now be smiling on the latest attempt to utilise sparse resources in this hard countryside.

From the beginning, this house was planned as a self-contained environment.So, as we might expect, a water container of 30 meters provides for all the needs of the house and garden, with rainwater properly stored and purified for drinking. Water is separated at exit, and enough goes toward keeping the garden satisfied. Two shredders exist and these, with storage areas, recycle household and garden waste for the benefit of the whole garden. Power is courtesy of four solar panels, actually not enough, and power needs to be used sparingly. Electricity is supplemented by the occasional use of a noisy generator when batteries are flat. It is only a matter of time before the house connects to the grid, for better and worse, but for now, a fridge, but not a freezer, and a washing machine are running, alongside ample lighting and hot water. 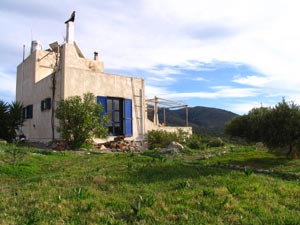 The house is a treat. I loved the light and good use of limited downstairs space, both welcoming and reflective of the personalities who occupy it on a daily basis. I enjoyed an open, Cretan style kitchen and sitting area, a fireplace in the right place and enough room to chatter while chopping salad for lunch. This allows those fortunate enough, like us, waiting to be fed, the opportunity to offer advice on the correct use of herbs, which every cook surely appreciates.

The walls feel thick and solid, like a stone structure, built with the cold winter winds in mind. The house rises to three floors,including an extra room planted on top, and is like the garden,mixing village craft with modern lightness of texture to satisfying effect. The garden and the house work harmoniously, both in themselves and as a whole entity. Furnishing is simple and light. Open colours reflect the natural light which pours through this multi-faceted and intriguing building. The effect is modern (or Post- 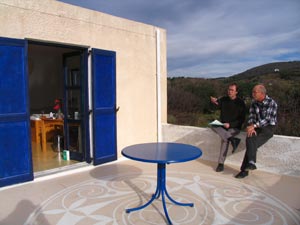 Modern,depending on your view), and Mediterranean. Good-sized balconies offer air and seating on three sides of the house. Yannis and I were given permission to look at each of the two and a half floors.The top deck is used by Wolfgang as an office where he dreams his dreams when not working in the garden or on the internet. Virginia has her own workspace where she is at peace within the home she has found, here in Lassithi. Neither of these two look like they have stopped searching. It is a restlessness that I found refreshinga nd admirable, as they have every intention of leading active lives from this base in the hills.

They met in Crete, Wolfgang and Virginia, and they are here to stay.

Wolfgang manages to combine worldly wisdom witha genuine love of Crete and a respect for ways of life in this strange island. He has been around, taking retirement from a (presumably) well paid job with Audi cars to begin a life of searching in Crete.It has taken him three years on the island to arrive in this spot.Prior to this point, he had the vision to live in an abandoned monastery, which he had found at the South coast in 1995. I indeed he hoped to purchase, and renovate the old monastery building,but was disappointed by the churches lack of co-operation in any secular ideas. So he moved to Chaniá and bishop Eirinaios was friendly enough to offer to him different properties, that needed a caretaker. He decided to dwell in an historic estate,used by the church as a holiday camp. After one season of voluntary work, maintaining the semi-abandoned monastic property, Wolfgang had suggested to open the place by and by for cultural and educational events. He tells us that this was met with complete rejection.Even knowing the insularity of the Orthodox ministry, he was saddened by the bishop’s response, and the Church’s closed mindedness in this case. Not bitter, he keeps an open mind on the future,open to new ideas for regenerating unused property for the benefit of communities. He is happy to be here and looks forward to the challenge of developing his ideas.

Virginia is definitely a people person, needing less the idea of a major project, more the satisfaction that comes with putting people together and seeing the results of a meeting of minds. She has energy and spirit, both vital to her. After seven years living in Crete, she speaks good Greek. And neither seeks the security of any foreign ‘ghetto’. She would be happy if her home, and its grounds, could be utilized by people,Greek and foreign, as one centre among others, to exchange ideas,to build friendships and support one another in creating a network of creativity around the region. I felt sure, in speaking to her,that this could be achieved. There will be an increasing need for centres in Crete, where people congregate. This seems to be happeningnow, as ideas of self-help and mutual support among groups in the population take hold. 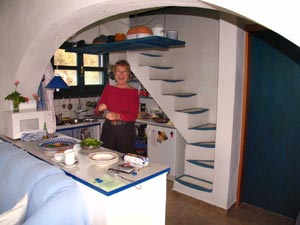 After so many years living in her first Cretan home, Chania, Virginia had regrets about leaving friends and a settled life. But they fell in love, and Wolf had a strong desire to find a special house for them both. He did that. It happened to be at the other end of the island, but homes like this are hard to find in Akrotiri. Virginia looks on this place as a challenge too, clearly a beautiful place, but also an opportunity to create a new network. Now, they have no regrets. I would like to thank them both for letting us into their lives for a few hours. The time passed too quickly and we had to travel home.
Louis Tracy 2005

During our conversations, a theme emerged. People coming to this island, this Crete, often become isolated and lost. Virginia and Wolfgang both recognised this. The magic is… well, it is there, but like most love affairs, the glitter wears off.There is a time when decisions have to be made about staying or going.

To offer support with these decisions, and perhaps offer practical advice, we invite people to contact the CreteGazette. Correspondence on the subject will be dealt with in confidence, and we respect the rights of our readers not to give their names.