Are we proud of our museums?

When I was in primary school, I remember being taken to visit something special, like a show or an exhibition. Afterwards, the teacher wanted us to write down our impressions. I am going to do the exact same thing this month in my article. My impressions were a ‘product’ of my visits to the Archaeological and the Historical Museums of Heraklion. When I entered the first of these, some employee welcomed me with a …polite “What do you want?”. I gave him my -six euro! – ticket and I asked him if it’s all right to take photographs. He informed me that I could shoot but without flash. So, I started wandering around. 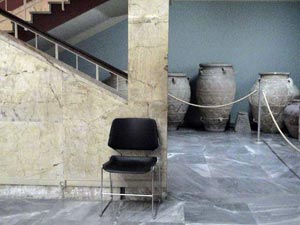 The first thing that I noticed was the absence of the “ancient-keepers” -or anyway the people who are paid to say “Do not touch”. So, I have started touching -on purpose-whatever was not covered under glass windows-to find out if someone would stop me, if someone at least was watching through closed loop or something like that. Nothing. I also took photographs with flash, but the empty chairs of the invisible ancient-keepers didn’t say anything to me.

I am standing in front of something that looks like a stone-chest and I’m searching for the tag that explains what every object is. Nowhere. Was it a chest? Was it a sarcophagus? I guess I am never going to find out, as I’ll never find out what was the use of many many objects. The explanation is simple. There were nor tags or labels. You just let your imagination free and you go wherever it takes you…

Here is another tragic omission. The Minoan wall painting from the palace at Knossos that presents the “Taurokathapsia” -where one person is holding a bull from his horns and another is trying to jump over him- is well-known and famous. It didn’t have a label to say that this is “Taurokathapsia”, in contrast with other wall-paintings not so reputed, but with their tags properly in order like the “Blue Ladies”.

It also impressed me much that in display cases with two levels, there was only one tag in their bottom where, for example- was written: “Talents, jewels of such and such era, figurines, earthen vessels etc.” Then, you had to guess which was the talent, which the jewel, which the figurine and which the vessel. So far, I had known that either you enumerate all the objects and in the bottom you insert an index. This will explain, next to each number, what is known about the object. Alternatively, explanations can be placed under each exhibit. Well, they probably apply systems that I don’t understand, although I have studied this field.

While walking, I also discovered the ancient-keepers. They were gathered in a stairwell, chatting so loudly that they were sounding to the neighbouring halls. I knew till now that in museums, libraries etc. we maintain quiet. There are other systems that I also don’t understand. I am not going to comment on the fact that one of them ribbed another by saying: “Why aren’t you in your hall?”, “There are no people” she answered, while I was in “her” hall sitting on an ancient stone-footstool!!! She hadn’t even noticed me!

I also am not going to comment on the contrast in the care between the room with Minoa’s ring and other rooms more “humble”. As if the vessels -that are painted thousands of years ago, still preserving their colour like they were painted yesterday- are less important than Minoa’s ring! While the ring is being kept in a separate room behind a showcase with a spotless vitrine and red background, the other exhibits are located in showcases not exactly clean, and on textiles where is ascertained the intense essence of mildew.

The best part though, I have left it for the conclusion. I noticed, written on many objects and marble statues, a four-digit number. And since our ancient ancestors had no pencils, much less felt tipped pens, I realized that this was the serial number of each exhibit, written ON the object, and in many cases TWICE, as if the first was off-whitened. Was it so expensive to put each object on a base-like some of the museum’s exhibits- and to note the serial number on the back? I just can’t stand that objects and statues that were preserved and saved through all those centuries, are destroyed by people who write on them with black or blue pen!

On the other hand, I have only nice words to say about the Historical Museum of our town, Heraklion. First of all, it is located in a great spot of our city. Secondly, it is based upon a private initiative and this is meritorious, and also it is my pleasure to visit it every two or three months. The environment is absolutely clean, well-looked-after, with proper keeping and only three euros to enter. You can see Heraklion through different eras, folklore elements, photographic material, traditional musical instruments, typographical machines and fascinating objects from past years, from everyday utensils and coins of antiquity, to guns and uniforms of the 1821’s Greek revolution and the Second World War. An impressive feature is an interior representation of a traditional Cretan house with its fireplace and its loom, and the room of the great Cretan writer Nikos Kazantzakis. There are so many others that if I continue writing, I will never end. The Historical Museum indeed constitutes an ornament for our city. Apart from the permanent exhibits, there is also an alternative display that changes regularly. During this period of time there is a photo exhibition with topic “Gypsies, Through My Eyes”, that is being accompanied with various activities and seminars, like screenings, lectures or the presence of artists like Ross Daly. Also remarkable are the four programs that are being run from the museum and are being applied to groups of children from 5 to 15 years old. They are free for young people to attend: “The Circle of Bread”, “Spin”, “The Coins” and “Objects and Icons of a War”.

I unreservedly recommend a visit to the Historical Museum but also to the Archaeological one. The contrasts between the two are huge and the condition of the Archaeological one is not coincidental, because last summer I had also visited, and the situation was the same. But still, the exhibits are beautiful despite their neglected home. On the other hand, the Historical museum is a place that is necessary for someone to visit, as if he’ll come out more wise. That’s all for this month, may you have a Happy New Year with health and less trouble. 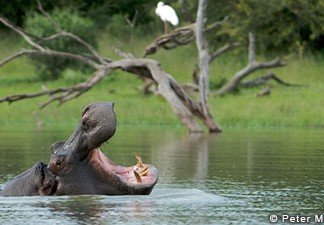 Elephants and Hippos in Katharo Plateau in Crete