The environmental organizations in Crete opposed to the project say that this investment can irreparably damage the virgin region in Cape Sidero on the Eastern Coast of Crete, a Natura 2000 designated area. They add that it would benefit the residents just slightly, or not at all. Their opposition has been decisive and strong, therefore they filed an objection against the Environmental Study submitted by the British Company.

The Greek Ministry of Environmental Policy had approved the terms of the project as submitted. Thus, in March 2007 the Cretan environmental organizations submitted a request and plea to the Supreme Court in Greece asking for the annulment of the original decision. The Supreme Court, after three postponements, accepted their plea, annulling the previous governmental decree and the plans for the golf village in Eastern Crete.

This verdict of the Supreme Court is a huge victory for the ecologists in Crete and will be an example and obstacle to any development project that will threaten the natural habitat on the island.

It is worth mentioning that a little south from Cape Sidero there is another, similar investment- development plan taking place. It is also closely followed by the Cretan Ecologists, who want to ensure that all legal terms and regulations are followed and that there will be no potential danger for the sensitive ecosystem in the region.

Vindication for the Environmental Organizations in Crete

The Cretan Network of Environmental Organizations EcoCrete, has received with great pleasure and satisfaction the verdict of the Supreme Court. The Court accepted the request of the environmental groups and hundreds of residents of Eastern Crete, annulling the ministerial decree that was backing the study about the serious consequences of the huge tourist project in the preserved region of the Natura Network 2000 at Cape Sidero.

This decision is of significant importance for the ecological movement in the country, because it is based on environmental arguments which proved to be stronger than the plans of the investors, the Foundation of the Toplou Monastery and their several supporters. This plan was characterized as the biggest tourist investment in the Balkans and was backed by the latest government, but was nothing more than a political and financial scandal, as it is proved today.

The EcoCrete Network thanks one by one all thee people who helped prevent this scandal and who fought with fidelity and disinterestedness in this crucial case for the environment: the citizens who signed the petitions along with the environmental organizations, the legal representatives, the scientists, politicians, friends in Crete, Greece and the entire World. We specifically thank professors Oliver Rackham and Jennifer Moody for the international campaign they launched a year ago to gather as many signatures as possible against this investment. They managed to collect more than 10.000 signatures and numerous encouraging comments, but they also helped elevate from obscurity the ecological, archaeological, and historical wealth, as well as the significant importance of Cape Sidero.

The environmental organizations have a lot of battles to fight in the coming future. The preserved and protected areas of our land are still ‘unprotected’ and abandoned, suffering from the indifference of the officials. They are areas of world heritage and significant bio-variety, nevertheless, no management projects are planned or launched by the State. Laws that aim at protecting these areas, as well as archaeological sites and natural habitats, are breeched and encroached. They have become preys to ‘investors’ who try to benefit from the ‘cheap’ land to build golf courts and thousands of resort residencies, extorting this glorious natural and cultural source from the local communities.

The environmental organizations are ready to make the next steps studying, suggesting, and defending sustainable solutions for development that meet the requirements and needs of the global environmental, economic, and cultural crisis. People start realizing that the protection of the environment, as well as the natural resources and the cultural identity of the regions, are mandatory if we want to have a sustainable future.

From the Administration of the EcoCrete Network

Cookies are small files which are stored on a visitor’s computer. They are designed to hold a modest amount of data specific to a particular browser and website, and can be accessed either by the web server or the client computer. This allows the server to deliver a webpage tailored to a particular visitor, or the page itself can contain some script which is aware of the data in the cookie and so is able to carry information from your visit to a website to the next.There is a lot of concern about privacy and security on the internet. Cookies do not in themselves present a threat to privacy, since they can only be used to store information that the user has volunteered to offer or that the web server already has.

Cookies to save browsing preferences and to optimize the visitor’s browsing experience. Among these technical cookies are, for example, those to set the language and the currency preference or for the management of members accounts and users comments.

Google Analytics, Google AdSense, Google AdWords. Our website uses the above services or we plan to use them in the future. Cookies may be set from a few different domains, including google.com, doubleclick.net, googlesyndication.com, or googleadservices.com.Google Analytics: These cookies are set to let us see how visitors use the website and where their visits to the website originated. This anonymous information is useful for improving our website and aligning it better to your needs of our visitors. Learn more about Google Analytics cookies.Google Adwords or DoubleClick: This cookie is used to display advertisements on our website. Advertisements may be adapted to your interests, according to the pages you have viewed on our website or in other websites (browsing history). No personal data collected on our website or on third-party websites is stored by this cookie.Collected data may include demographic data and/or browsing history, products viewed, purchases resulting from advertising campaigns. They are used for purposes such as: See more detail about the types of cookie used by Google or how Google uses data when you use our website.

A visitor can manage his / her own preferences for cookies directly from within his / her browser and prevent – for example – third parties from installing them. Through the browser preferences, it is also possible to delete cookies installed in the past, including the cookies that might possibly have saved the consent for the installation of cookies by this or any other website. It is important to note that by disabling all cookies, the functionality of this website may be altered with a negative impact on appearance or ease of use. Users can find information about how to manage cookies in their browser at the following addresses: *If you use another browser, look for cookies configuration in its options settings. 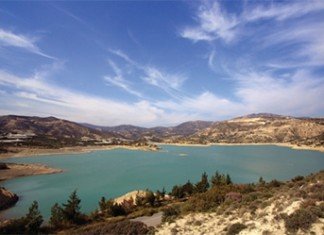 Forestation at Bramiana Lake near Ierapetra