Crete has been having earthquakes and I haven’t even noticed! I had visited Crete many times before we moved here a few years ago. The thought of earthquakes never entered my mind until I mentioned to an acquaintance:

“We’re moving to Crete the end of this summer! He said, “Crete? Isn’t that the place where they have all the earthquakes?”

Even though I had never experienced an earthquake in all the times I had visited Crete, I felt surprised and shaken. Starting from that time on, I was worried about earthquakes.

We found a lovely almost new house to rent. I quickly became exhausted, tiredly dragging myself through the days. I had heard about an earthquake in India where many people had been lost because the earthquake happened at night when most families were sleeping in bed. So I started sleeping as lightly as possible each night.

I didn’t remember that from the time I started visiting Greece I was meeting a surprisingly large number of structural engineers. If only I had remembered I probably would have understood the coincidence – structural engineers and earthquakes. New homes are carefully built and buildings are examined for safety.

One evening I finally realized losing sleep over earthquakes just wasn’t necessary. My daughters were in bed fast asleep after a hard day of play when suddenly I felt the house start to jiggle like Jell-O on a plate. I rushed into their rooms as quickly as possible. I grabbed their tennis shoes. I shouted, “Wake up, go outside and take your shoes!”

Then the jiggling stopped. It was over! I hadn’t gotten the girls out of the house; they hadn’t even woken during my frenzied panic. The house wasn’t damaged; there were no signs of an earthquake; the whole thing had only lasted a few seconds. 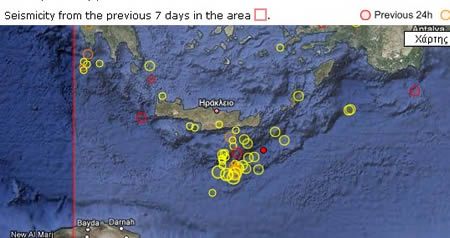 The earthquake of 2006 in Crete

September 1, 2006 an earthquake struck that did last long enough with enough shaking to cause us to leave the house. At about 1:30 p.m. one Sunday we felt a tremor which measured about 6.9 on the Richter scale. This quake was experienced not only in Greece but also in neighboring countries. The online English newspaper, www.eKathimerini.com quoted the U.S. Geological Survey as reporting that about 6 million people may have felt the effect in Greece, Southern Italy, Jordan, Cyprus and parts of the Balkans.

The epicenter was located in the seabed of the island, Kythera, about 200 kilometers south of Athens. The Athens Geodynamic Institute reported, “The earthquake occurred about 30 kilometers of Kythera at a depth of 70 kilometers.”

Kythera and Crete experienced some damages but fortunately no one was seriously injured.

Museums holding ancient treasures are protected from tremors both by the structural technology of the building as well as anti-seismic technology for the exhibits. Mr. Costas Spyrakos, National Technical University of Athens, has explained that display cases are built with seismic insulation and mechanisms which absorb shock waves. He reported this type of modern technology can lessen the intensity, making the shock “four to six times smaller.” Also there exist many simple ways to protect museum exhibits. “Securing exhibits in place with special string offers basic protection,” Mr. Spyrakos explained.

The earthquake of 2009 in Crete

In July, 2009 Crete experienced tremors, but I wouldn’t even have known if I wasn’t checking my Twitter account regularly!

Earthquakes bring people together in many ways. During Turkey’s most devastating earthquake Greece was the first country to send emergency workers. In the spring of last year (May, 2008) Greek and Turkish rescue teams participated together in an exercise to build confidence during the necessary high pressure work after an earthquake. Lt. Col. Giorgos Beldekos commented the atmosphere during the exercise was “an exceptional atmosphere of cooperation.”

Damages from the earthquake of 2006 in Crete