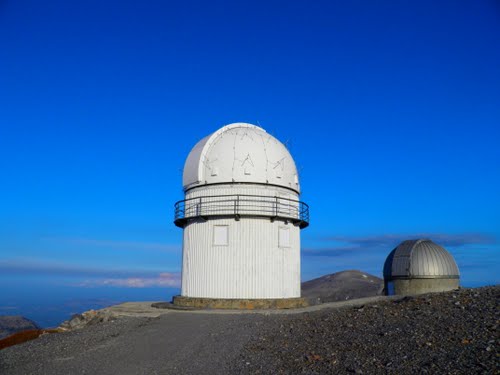 The Skinakas Observatory is located on the peak of Skinakas at an altitude of 1750 m., a few kilometres after Anogia and 60 km from Heraklion.

The Skinakas Observatory has been built and operates as part of a scientific research collaboration between the University of Crete, the Foundation for Research and Technology-Hellas (FORTH) and the Max-Planck-Institut für Extraterrestrische Physik of Germany.

The Observatory has two telescopes: a Modified Ritchey Cretien telescope with a 1.3m aperture (focal ratio of F 7.6) and a 30cm telescope (focal ratio F 3.2). The building for the small telescope was built in 1986, and observations started in 1987.

The large telescope is the largest telescope in Greece at the moment, and became operational in October 1995. The optical system was manufactured by Karl Zeiss, and the mechanical parts by DFM Engineering.

The favourable climatological conditions prevailing in Crete (large number of clear-sky nights per year) combined with the high mountains, place the island of Crete among the best locations in Europe for high quality astronomical observations. These facts were influential in the establishment of the Skinakas Observatory.

The Skinakas Observatory is open to the public for a few days each year, so that the people of Crete can learn about the important research work being done there. Dates for 2007 are: